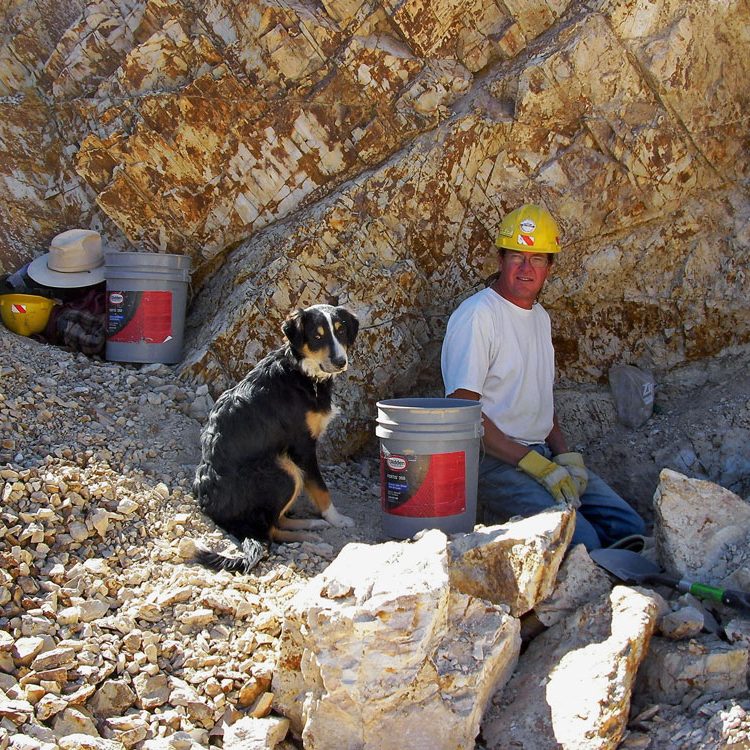 Richard Shull was born near Los Angeles in 1965, to a family of talented artists and ancestral miners who immigrated to California during the gold rush. Inspired by his grandfather who worked at many mines in the Nevada desert, Richard naturally migrated to this same area to pursue his dreams of finding and creating something special. His childhood years were filled with his own experimental backyard sculptures and sojourns throughout the West, which included stops at every rock shop along the way. These early fascinations guided Shull into studies of fine art and natural sciences, which culminated in his residency at the Gemological Institute of America and subsequent Graduate Gemologist diploma in 1992.

Shull’s interest in abstract art and the mechanical and optical properties of gem materials blossomed as he taught himself to cut, combining his design ideas with the gemstones he has spent years studying and mining in the field. His carved gemstones with flowing, organic lines, liquid optical effects, and truly professional finish have been recognized on the cover of Lapidary Journal‘s 50th Anniversary Issue, in Henry Hunt’s American Lapidary, and in many other trade publications over the years. In his sculptural art pieces, he creates an elegant balance of mineral, light, and art designed especially for fine jewelry. Shull has worked with a myriad of different gem materials such as transparent ametrine and tourmalines, as well as translucent gems like opal and chalcedony, but the mining and cutting of phosphate gems, turquoise and variscite, captured his heart from the very beginning.

While studying at GIA, Richard would spend weekends in the Mojave Desert mining turquoise with Ed Nazelrod at the classic Apache Canyon mines near Baker, CA, returning to class with high grade natural turquoise that blew away the classroom samples of the finest Persian turquoise, providing lessons for himself and the class that there is so much more out there to learn about. Now almost 30 years and many mines and tens of thousands of stones later, we are still learning and discovering new things! And we’re doing our best to share that knowledge. Richard was the author of the Gemstone Column for Art Jewelry Magazine from 2009 to 2014. Most recently, Richard wrote the Gemological section in Mike Ryan and Philip Chambless’s new turquoise history book, Turquoise in America – 1910 to 1990, which was published in August 2020. 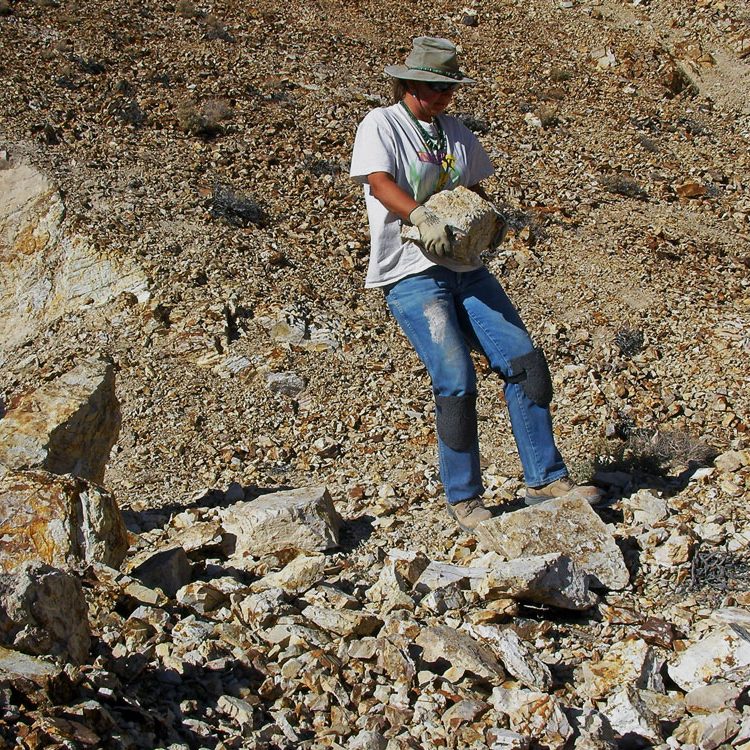 Helen Constantine-Shull grew up in the Southern California foothills of 10,049 ft. Mt. Baldy. Even from before birth, she accompanied her parents and later her two brothers on numerous hiking and camping trips to the Eastern Sierra Nevada, as well as family travels throughout the U.S. and overseas. During this time, Helen developed a deep appreciation of the outdoors and the diversity of human culture.

After earning a B.A. in business administration and working in the Bay Area, she took time off to live in the mountains just east of Yosemite National Park. While there in the town of Lee Vining on the shores of Mono Lake, Helen was given the opportunity to both illustrate and write a botanical guide to the surrounding Mono Basin. This experience led her to pursue her dream of furthering her education, and she returned to school for an M.A. in botany.

By spending so much time in the field staring down at plants, Helen’s long-time avocation of geology and stones was piqued as well. Alongside by her husband, she began mining gems and experimenting with lapidary art and design. Together they mine, process raw materials, cut myriads of cabochons, and craft fine, heirloom quality gemstone beads. Helen also takes the stones in her hands and creates jewelry following exacting standards. By using an old world level of quality, Helen’s creations have found a worldwide following. After finding a need to capture a record of the Shulls’ artistry (and adventures), she developed special techniques of gemstone photography used to create the images published in several major jewelry trade journals.

“Beads were the first items used by humans to adorn themselves…and turquoise was one of the first gems used to create beads. Since that first day, beads…and turquoise!…have been irresistible to us. I find great pleasure in using techniques based on those of the ancients to craft my beads, often utilizing recently discovered gem materials such as our turquoise and variscite, as well as other gems like Peruvian opals, fire opals and a variety of tourmalines. Especially rewarding is the opportunity to both unearth the raw stones and see them through to the completed cabochon, bead or jewelry piece. I hope that as our stones are worn by their owners, both radiate with beauty.”

The Shulls work out of their studio and live near their mines in the Nevada desert.

There has never been a better time in history for the admirer of natural colored gemstones! In addition to traditional sources of gems, there have been important finds of new and exciting gem materials throughout the 20th and 21st centuries. As explorers, miners, and cutters, we are committed to bringing you one of the finest selections of natural and unenhanced stones, both new and classic. We hope our gems will inspire you and light up your designs with unique and diverse natural color! 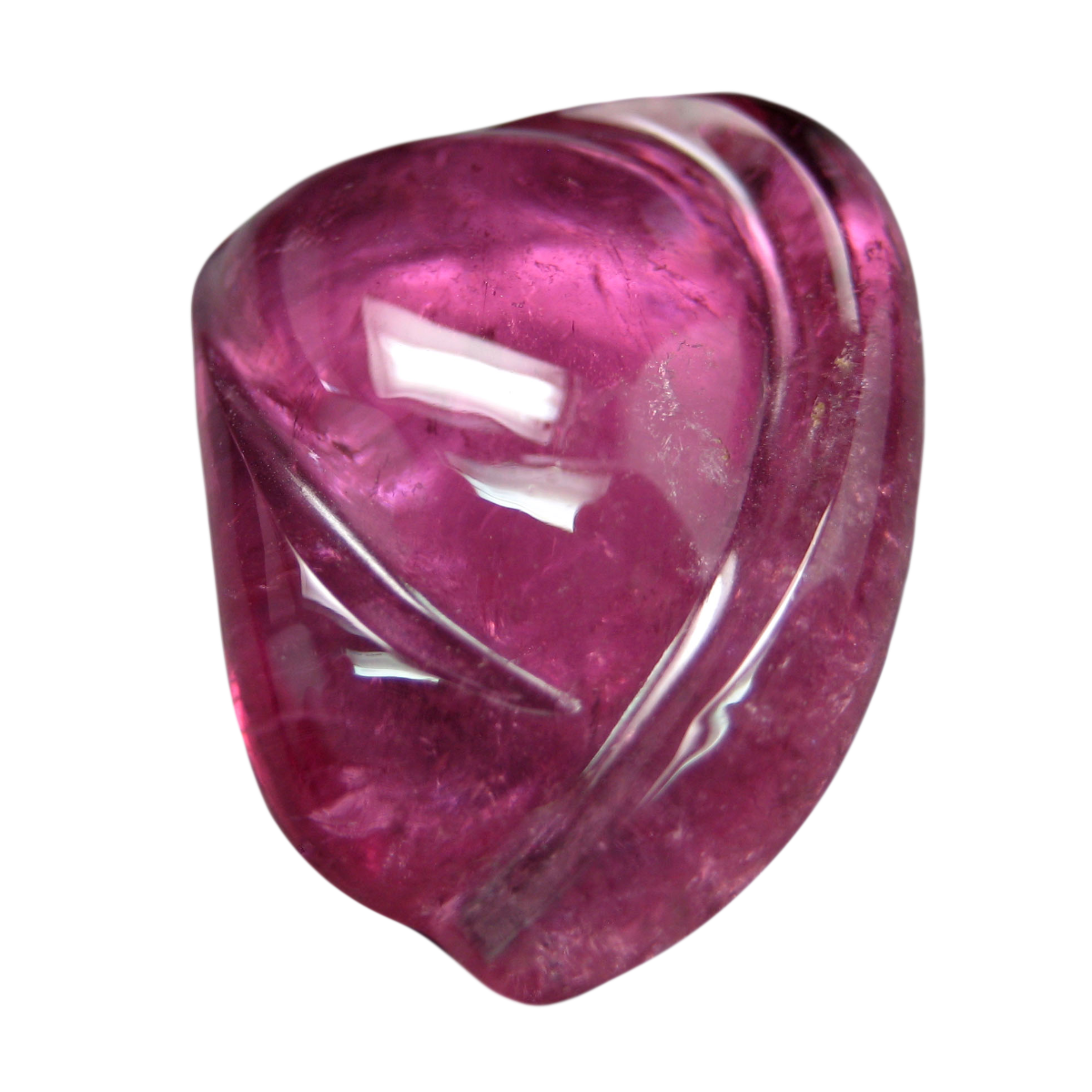 Carving in both geometric and curvilinear styles, Richard Shull, G.G. transforms rough gemstones into miniature works of art that have been recognized worldwide for their design and attention to detail. These stones can be set in gold, silver, or platinum to create stunning jewelry pieces, or simply collected for their sculptural beauty. 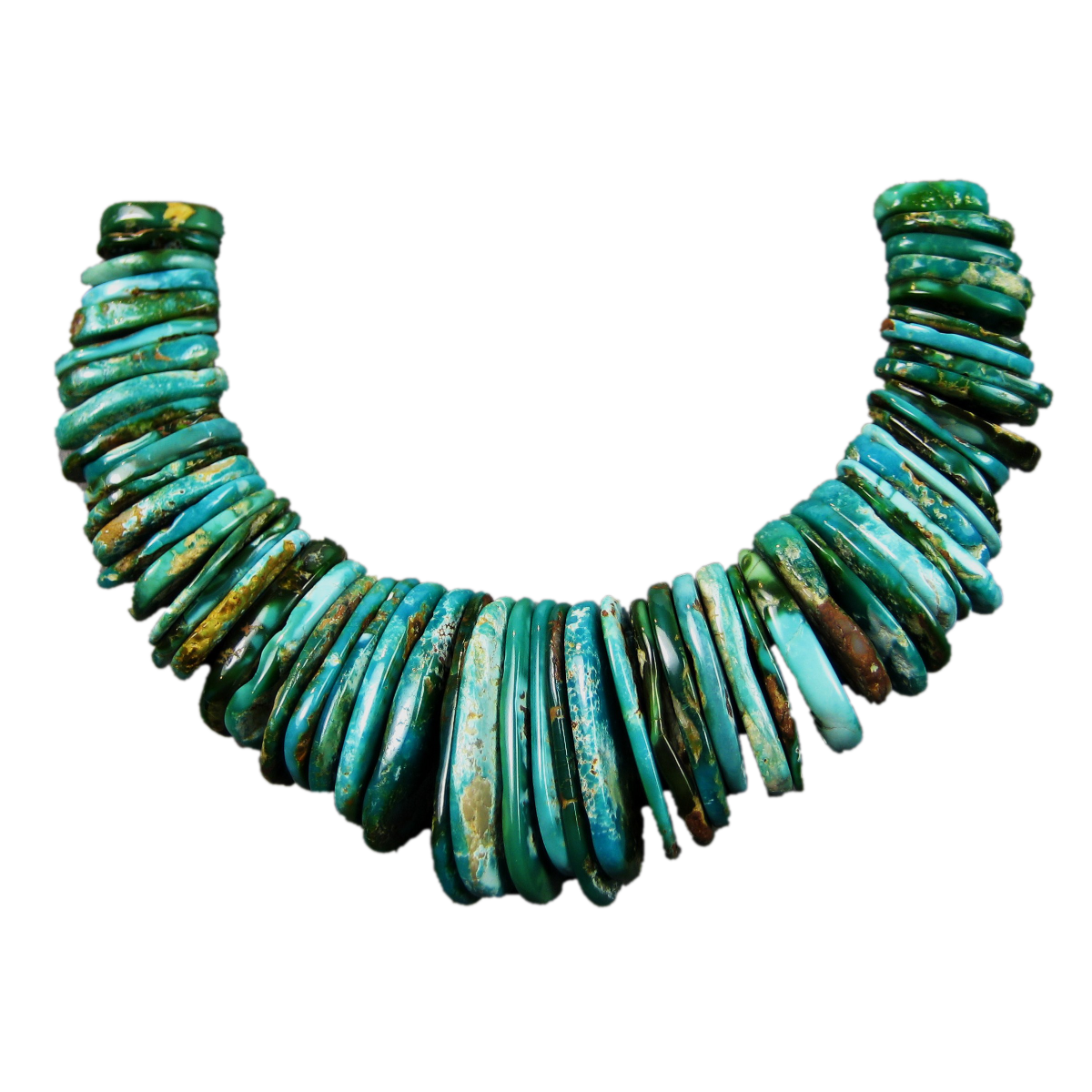 Some of the oldest recorded objects made by human beings are beads. We offer a variety of heirloom quality single and short strand heishe and tab beads, drops, and focal beads in unique gem materials. Richard and Helen Shull do the entire process of designing, cutting, drilling, and polishing our gemstone beads right here in our Nevada, USA studio. 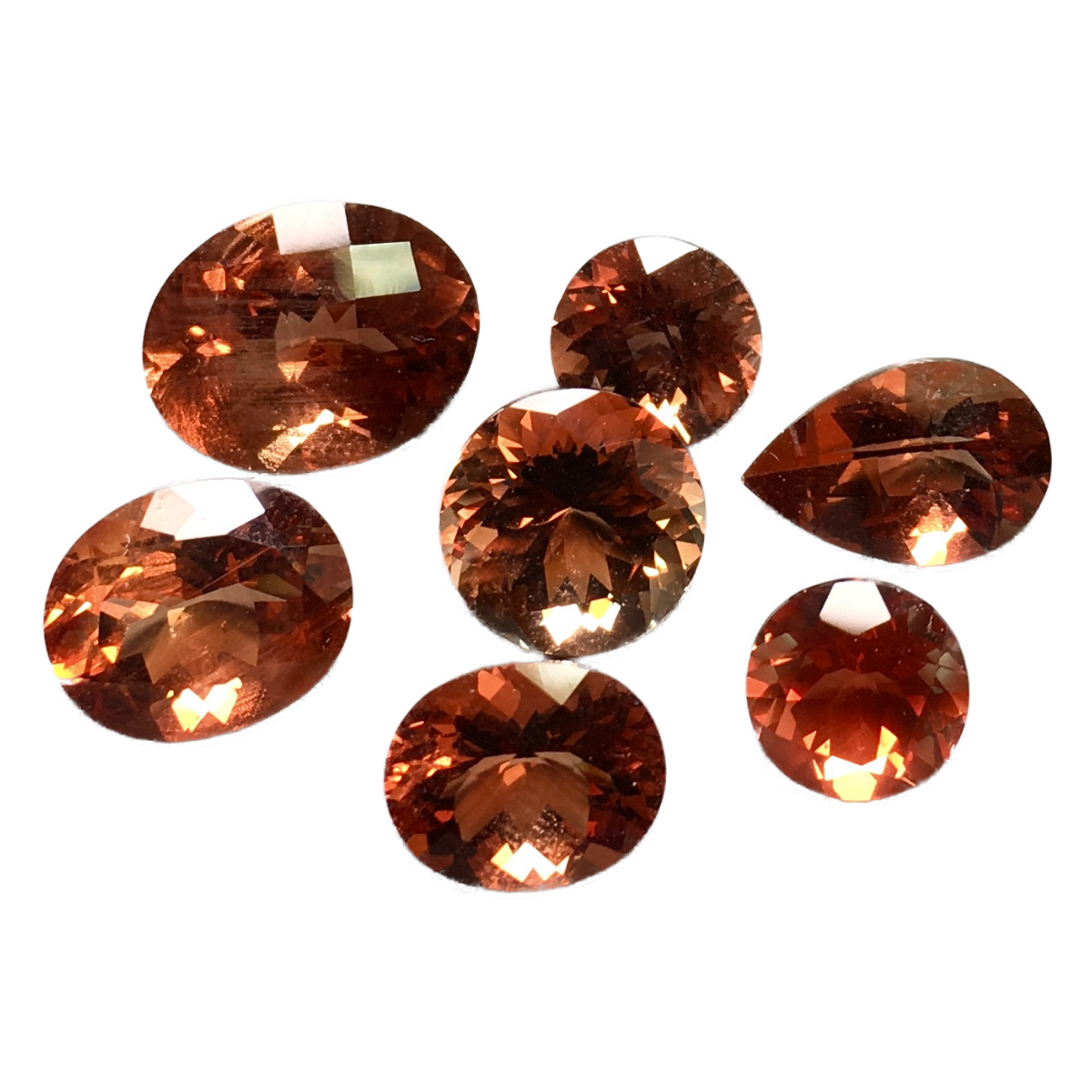 Find high quality, all natural, unenhanced faceted stones in American and unique worldwide gems here at Out of Our Mines! Our facet sets are meticulously graded and carefully matched for you. When you see our quality, you’ll be back for more! 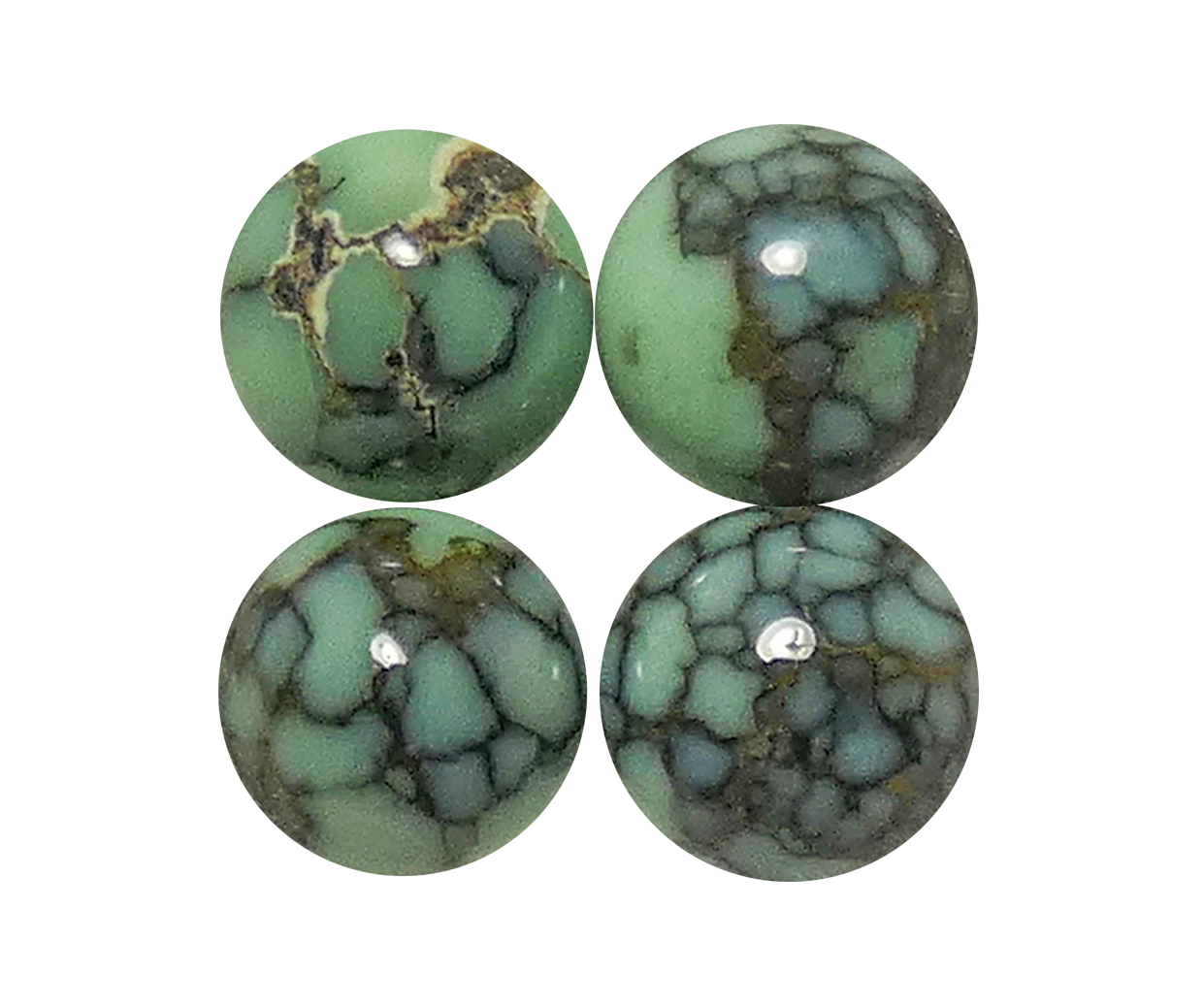 We offer both free size and designer cabochons cut by us, as well as Fair Trade, precision cut, calibrated cabochons in standard sizes from our mines and more. We are Your Source for unique stones, and top quality, untreated, calibrated gemstone cabochons from turquoise to tourmaline and many more! 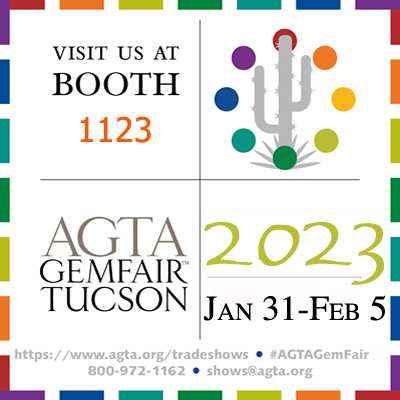 Out of Our Mines at AGTA Gemfair

Visit Out of Our Mines! Wholesale Only.

We look forward to seeing you!!

Turquoise and Variscite from our mines and more! Rough, Cut Stones, Jewelry! Open to the Public!

Visit Us in The Anasazi Ballroom: Booths #21-23

We’re working on some gorgeous Nevada Blue for t

It’s here! And were in it! Along with an incredi

I love the sultry, earthy colors in these gems! Al

Come see us in Tucson for the best selection of hi

And lastly, a few 7-8mm coral puff hearts! These a

Hi Everyone! PLEASE READ: Welcome to my little cor

The Tucson Gem Shows are coming up! Swing by our b

We’re excited the Tucson Gem Shows are almost he

Sending you lots of beautiful crystals ❄️ and

It’s a beautiful day here today! Hope yours is b

Thank you so much for coming to my sale today! I k

And lastly, something very special to celebrate th

We revere and respect the land, the stones, and the people who work with both.

The stones you get from us to incorporate into your artwork, your special collection, or to simply wear and enjoy, have been filled with love, honor and respect. Most of the work we do ourselves, but when we do get help, we make sure it is Fair Trade.

We live as close as possible to the land we work, so we understand the ground and the environment we are working with. We make as little new disturbance as possible and work tirelessly to respect and not waste our precious resource. Sometimes that makes our work take longer than others, but we feel it is worth it in the long run: for the earth, for the stone, and for our integrity. We also make sure that our operations are legally bonded for reclamation when the time comes.

As firm members of the American Gem Trade Association, we are very serious about accuracy in mineral identification, disclosure of treatments, and maintaining the provenance of our stones.

Accuracy and disclosure of any gem treatments is a requirement of membership in AGTA, so we do that and more to maintain the integrity of our cut stones.

We keep track of the origin of each stone and provide certification and disclosure with every purchase you make. Most of our stones are either completely natural or, in the case of turquoise and variscite, natural stone with backing. You can rest assured, if there has been any treatment done to a stone (for example: backing, surface filling, stabilization, enhancement), we will tell you about it on the product listing and in the certification that comes with your purchase. Keep this provenance with your stones so that it is there for future generations.

And if you ever have any questions, please contact us.